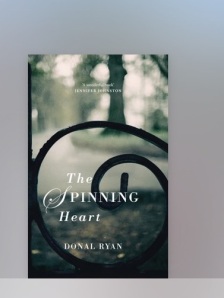 Donal Ryan doesn’t do rose tinted glasses and it is clear that the Irish Tourist Board aren’t going to be part funding the film version of this close to the bone realistic depiction of post Celtic Tiger Ireland. The novel has been long listed for the Mann Booker Prize and having read it the judges are unlikely to jump on a plane to explore the delights of Coolcappa, Moyross, Portroe, or the many uninviting ghost estates littering the Irish countryside.

The story of the novel unfolds and is presented to us via the inner monologues of twenty one characters living in a small rural community – twenty are alive while one character speaks from beyond the grave, still trapped in his squalid kitchen because ‘the Vatican done away with Purgatory’. This unique exposition reveals the incomplete story to the reader. Even at the end there are many loose ends, unanswered questions, unfinished plotlines. We are presented with numerous psychological profiles, each private self far different from the public personae on view. This disturbing epiphany is unsettling to say the least and is testimony to the searing perceptions and wry humour of this new shining star in the Irish literary firmament.

The events of the novel are ordinary and commonplace – apart maybe from the abduction of a young child from a crèche and the murder of an old bitter man. We are given insights into the lives of many affected by the economic crash, including a young Russian emigre stranded in a landscape where all dreams have died. Indeed, the characters in this novel have all gone three rounds with the Harvest Fair bucking bronco and they have all landed on their arse or their head. There are echoes and flashbacks to Synge’s masterpiece – Old Mahon, Christy and indeed Pegeen Mike are all here in this grubby modern Ireland. Themes of disappointment, regret, frustrated parental expectation, toxic shame, despair and depression are the new reality in this modern Littleton – or Ballybeg even!

The schitzophrenic, confessional nature of the novel lends to inevitable confusion in the reader. The characters struggle to cope in a world without moral compass or government. The priest and the Garda play bit parts but are rarely consulted or heeded. The author very cleverly sprinkles references to the present throughout the novel – we come across references to the whiners on Liveline, the State Pathologist, Dr. Marie Cassidy, the Abbeylara Incident and Donal Og Cusack ‘coming out of the closet below in Cork’!

Really, the more one thinks and reflects on the novel, the more one has to acknowledge the subtlety and genius of the author. He has managed to chronicle an era ‘warts and all’ and he has done so from a variety of perspectives with a weird and wonderful motley cast of distinctive voices.