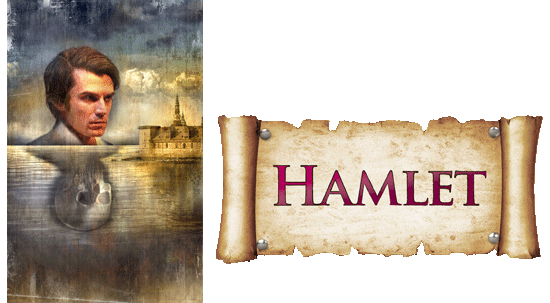 Hamlet, directed by and starring Sir Laurence Olivier, was the first British film to win the Academy Award for Best Picture in 1948.   Olivier’s Hamlet is the Shakespeare film that has received the most prestigious accolades, winning the Academy Awards for Best Picture and Best Actor and the Golden Lion at the Venice Film Festival in that year.  The film’s opening, with Olivier’s voice-over of his own interpretation of the play, was, however, criticised as reductive and somewhat simplistic: “This is the tragedy of a man who could not make up his mind” (Brode, 120).

Like all Shakespeare’s tragedies, Hamlet deals not just with the problems of individuals, but with the situation of man in the world.  It is a revenge tragedy, in which one death is demanded in place of another.  But it is much more.  Like Lear, Macbeth and Othello, Hamlet explores the nature and working of evil forces in human beings and in the body politic.  Like those plays, it enacts the dire consequences which follow when the bonds of nature are broken and evil forces and disorder are allowed free play.  The image that best conveys what happens in Hamlet, and indeed in the other great tragedies, is found in Macbeth.  To the overwrought hero of that play, his chief victim’s wounds seem, ‘like a breach in Nature / For ruin’s wasteful entrance’.  Macbeth’s image conveys a potent sense of universal desolation.  Nature itself (man’s social and moral order) has been wounded or breached by the murder of a lawful king; through the gap, the forces of ruin and disorder enter as an army might pour through a breach in a city wall.

Even a brief summary of the main elements in the Hamlet plot makes it clear that the Macbeth image expresses the central concerns of the earlier play.  The lawful king, Old Hamlet, has been murdered by his brother; regicide and fratricide, unnatural crimes, have opened a huge gap in the social and moral order of Denmark, and the way is left open for ruin and disorder to engulf the main protagonists in the tragic sequel.  One of the central images of the play is that of poison.  It is introduced with the literal poisoning of the Old Hamlet by Claudius; after this, a metaphorical poisoning seeps through the play.  At the outset, Marcellus senses that ‘something is rotten in the state of Denmark’, and Hamlet finds his world possessed only by ‘things rank and gross in nature’ (1,ii, 138).  He is not far off the mark: Denmark under Claudius becomes a place of intrigue, treachery, spying, mistrust, with someone hidden behind every curtain, or listening at every door. Marriage, love, friendship and loyalty are corroded by fear, suspicion and cynicism.  Polonius is prepared to have his son spied on and to twist the innocent relationship of Hamlet and Ophelia to his own sinister purposes: ‘I’ll loose my daughter to him’ (11, ii, 162).  Rosencrantz and Guildenstern, once Hamlet’s good friends, become spies for Claudius.   Eight people die.  All the members of the two families in the play, those of Old Hamlet and Polonius, are wiped out – so many die that the next King of Denmark is from Norway!.

The manner of the most significant deaths is worth underlining.  Gertrude, Claudius, Laertes and Hamlet are all poisoned, like King Hamlet, and Hamlet forces the poisoned cup on Claudius, already dying from the poisoned rapier.  Of the tragic victims, H.D.F. Kitto remarks that, ‘the conception which unites these eight persons in one coherent catastrophe may be said to be this: evil, once started on its course, will so work as to attach and overthrow impartially the good and the bad’ (Form and Meaning in Drama). As for the ‘bad’ characters, Claudius is their extreme representative; he moves from crime to crime until he is destroyed by his own schemes.  But even the innocent Ophelia is not exempt from the relentless progress of evil; she too must pay the price of the initial crime.  Claudius corrupts those around him.  Gertrude is the pathetic victim of her association with him.  What Hamlet thinks of her ‘sin’ condemns her to endure all her appalling consequences.  She will die without forgiveness or reconciliation; while she lives she will see her ‘deranged’ and beloved son kill Polonius in her presence, and endure his scathing condemnation of her conduct; she will see her husband at war with her son, all her hopes ruined, Ophelia driven insane and to suicide.  Laertes, by no means a figure of evil, also falls victim to the machinations of Claudius, and becomes a treacherous murderer.  Rosencrantz and Guildenstern, hardly constitutional villains, are likewise contaminated and likewise destroyed, as is Polonius.  Even Horatio is ready to commit suicide.

In the light of this, there seems little point in emphasising too much the personal problems of this or that character.  In Hamlet we are dealing with a great force of nature that, once unleashed, must work its deadly way through the world, destroying all in its path.  It is a force that makes all considerations of personal guilt or innocence appear insignificant.  It will not abate until the old, corrupted scheme of things has been wiped away, and a new order, here doubtfully represented by Fortinbras of Norway, is ready to take over.

The dominant image-pattern of Hamlet serves to emphasise the fact that the play is concerned in a major way with the spread of evil forces which destroy good and bad alike.  Reference has already been made to the imagery of poison; the rottenness of Denmark is seen in terms of poison.  The primary poisoner is Claudius.  The juice he pours into the ears of his brother is both a poison and a disease, a leprous distilment that corrupts the body while it kills.  From this fatal source, the evil, seen as a sickness, that will ultimately engulf all the major participants, spreads outward.  Most of the characters see their plight in terms of sickness.  The Queen talks of her ‘sick soul’; the king of the ‘hectic’ in his blood; Laertes seeks revenge as a means of easing ‘the sickness in my heart’.  Ophelia’s madness is called the ‘poison of deep grief’.  Even the Fortinbras expedition to Poland is seen in terms of a hidden disease:

This is the imposthume of much wealth and peace

That inward breaks, and shows no cause without

(Note: An imposthume is a septic swelling, like a boil.)

In her classic study of Shakespeare’s imagery, Caroline Spurgeon found that in Hamlet the idea of an ulcer or tumour, as descriptive of the unwholesome condition of Denmark morally is, on the whole, the dominating one.’  (Shakespeare’s Imagery and What it Tells us. p. 316).  Many of the more memorable images of the play are, in fact, ones of sickness and disease, and these contribute to the overall atmosphere.  Claudius is seen by Hamlet as ‘a mildewed ear, blasting his wholesome brother’.  At the end of the Closet Scene, he begs his mother not to dismiss his father’s apparition as due to her son’s madness, but to see it as evidence of her own guilt.  To refuse to recognise the truth,

Will but skin and film the ulcerous place

Whiles rank corruption, mining all within

When Hamlet comes upon Claudius at prayer, he declares that ‘This physic but prolongs thy sickly days’.  He sees the action of conscience in terms of a healthy countenance turning pale with sickness (‘the native hue of resolution is sicklied o’er with the pale cast of thought’).  Claudius finds in images of sickness a suitable means of expressing his own concerns.  When he hears that Polonius is dead, he sees his own failure to have Hamlet locked up as comparable to the cowardice of a man with a ‘foul disease’ who,

To keep it from divulging, let it feed

He continues to use similar images in reference to the Hamlet problem.  When he is sending him to England, he defends his action by reference to a proverb:

By desperate appliance are relieved

Again, his request to the King of England to have Hamlet put to death is couched in terms of a similar image, that of a patient suffering from a high fever seeking relief;

For like the hectic in my blood he rages

Perhaps his most characteristic, most incisive, image of sickness comes as he faces the danger of Hamlet’s return from England:

But to the quick o’ the ulcer

There can be little doubt that the atmosphere and mood of Hamlet are greatly influenced by such images of rottenness, disease, corruption, mortality, deception and treachery.  But this is not the whole story.  Any reader or spectator who tries to re-create and describe his imaginative experience of the plays must inevitably be conscious of another, altogether different, set of impressions which help to counteract the admittedly powerful images of disease and corruption.  Wilson Knight has argued that,

‘except for the original murder of Hamlet’s father, the Hamlet universe is one of healthy and robust life, good nature and humour, romance, strength and welfare; against this background is the figure of Hamlet pale with the consciousness of death’ (The Wheel of Fire, p. 32).

This is to go rather far in the other direction, but Hamlet is, indeed, a play of astonishing juxtapositions.  There is grim comedy in the face of death, as in the graveyard scene; much genuine comedy in the Hamlet-Polonius and Hamlet-Osric exchanges; frank good humour in the encounter between Hamlet and the Players and genuine kindness in the Hamlet-Horatio dialogues.  The Court of Elsinore may be a prison, a place of spying and of underlying corruption, but it is also a place where nobility, chivalry, ceremonial dignity and courtesy play a part.  Much of the imagery may be depressing, but there are very many flashes of beauty in the lyrical and descriptive passages: Hamlet seeing his graceful father,

‘like the herald Mercury / New lighted on a heaven-kissing hill’; Marcellus’ noble evocation of the beliefs surrounding Christmastide – ‘Some say that ever against that season comes / Wherein our Saviour’s birth is celebrated / The bird of dawning singeth all night long’.

Ophelia’s death is a beautifully-rendered pastoral scene.  The ritual of the court is elaborate, dignified and impressive.  Claudius is a villain, but he has a deep sense of formal propriety and of courtly ceremony.  His language is regal and urbane.   The fencing-match, despite what we know will be its inevitable outcome, can be a beautifully-staged spectacle.  Again, there is much grace and beauty in Hamlet’s evocation of the noble names from the classical past: Jove, Mars, Mercury, Priam, Caesar, Alexander, Hercules, Hyperion.  Perhaps the best single epitaph for the balance and juxtaposition of opposing moods, images and impressions in Hamlet, of its generous accommodation of divided and distinguished worlds, is found in the bland words of Claudius to his courtiers, with their admittedly spurious balancing:

The imperial jointress to this warlike state

Have we, as ‘twere with a defeated joy

With an auspicious and a drooping eye

With mirth in funeral and with dirge in marriage

‘Delight and dole’: there is no better description of what we find in Hamlet.  I wonder what would Sir Laurence Olivier make of that analysis?

H.D.F. Kitto, Form and Meaning in Drama: A Study of Six Greek Plays and of Hamlet, London: Methuen, 1956.

2 thoughts on “Hamlet: The World of the Play”