When we first encounter Macbeth he is portrayed as the mighty general, the king’s enforcer-in-chief, while the play ends with his inevitable, lonely, solitary death following his doomed, albeit brave, defense of the indefensible. So, it can be said, that the major pattern of the play is Macbeth’s progressive movement from centrality to isolation.  This pattern encompasses the whole play and expresses an essential process in every tragedy: the hero must confront his destiny alone.  Macbeth’s role is that of a man who begins as the central and most admired figure of his society and ends by being totally isolated from it in his lonely fortress in Dunsinane.  His ultimate fate suggests that of a sacrificial victim.  Having caused havoc in society and broken the bonds of nature, he must be isolated and destroyed so that natural and social order can be restored again – for the time being at least!

The opening of the play focuses attention on Macbeth as the heroic object of everyone’s admiration, well earned since he is the saviour of his country.  The captain’s account of his exploits in Act I, ii and the King’s lavish praise in Act I, iv serve to establish his heroic stature and his unique status in society before his fall.  But the images used in these scenes to convey Macbeth’s prowess as a warrior have another, more disturbing, effect.  There is a frightening savagery in some of the more memorable ones: the sword ‘which smoked with bloody execution’; the bloody hero who ‘carved out his passage’ and ‘unseamed’ his enemy as if anxious to ‘bathe in reeking wounds/ Or memorise another Golgotha’ (I, ii 18-22).  These reiterated images suggest Macbeth’s natural capacity – perhaps even his relish – for destruction.  Our first picture of him as provided by the bleeding sergeant is a faithful anticipation of our last one.  The early image of the warrior carving up his enemy with a smoking sword is mirrored in the last one of the ‘dead butcher’ (V, vii, 98) whose severed head is carried on to the stage by Macduff.  Echoes and anticipations of this kind are found everywhere in Macbeth.

Before Duncan’s murder we find the two Macbeths taking the first decisive step which will isolate them from the process of normal living and break the bonds which bind them to human nature and society.  With deliberate formality, Lady Macbeth dedicates herself to the power of evil: ‘Come you spirits/ That tend on mortal thoughts….’ (I, v, 38).  Later, Macbeth makes a similar prayer: ‘Thou sure and firm-set earth,/ Hear not my steps…’ (II, i, 56).  His separation from God is implied in his ‘Wherefore could I not pronounce “Amen”?’ (II, ii, 30).

Duncan’s murder hastens the process of Macbeth’s isolation.  Malcolm and Donalbain flee him (II, iii, 119); Banquo suspects him (III, i, 3).  Even before Banquo’s murder and the social debacle of the Banquet Scene, we have a glimpse of Macbeth estranged from his natural companions: ‘How now, my Lord!  Why do you keep alone,/ Of sorriest fancies your companions making’ (III, ii, 8-9).

The Banquet Scene (III, iv) marks a decisive stage in his alienation from his subjects.  His gradual estrangement even from Lady Macbeth has already been suggested in his failure to let her share in his plan to murder Banquo.  After her supreme efforts in the Banquet Scene she dwindles from being his ‘dearest partner of greatness’ (I, v, 10) to a passive listless, weary listener.  The last time we see him alone with her, at the end of Act III, iv, the collapse of their relationship is pathetically apparent; this is further underlined in his response to the news of her death.  The final movement of Act III, iv  has compelling visual images of Macbeth’s  separation from his subjects, who leave his feast in hasty disorder.  This is not the only abandonment: in the final scene we learn that Fleance has escaped (20), that Macduff ‘denies his person at our great bidding’ (128) and that Macbeth can depend so little on the loyalty of his followers that he must ‘keep a servant fee’d’ in all their houses (131).

The final movement of the play opens with news of growing opposition to Macbeth’s rule, and of intrigue and conspiracy against him.  Macduff has fled (IV, I, 140).  In Act V, Macbeth’s isolation is made explicit in reiterated images of abandonment and loneliness.  He articulates it in some of the greatest poetry of the play: ‘that which should accompany old age,/ As honour, love, obedience, troops of friends,/ I must not look to have’ (V, iii, 24).  The Doctor would desert him if he could (V, iii, 61-2).  We are twice reminded that many of his soldiers have gone over to the enemy, first by himself (‘Were they not forced with those that should be ours,/ We might have met them dareful, beard to beard’ V, v, 5) and later by Malcolm (‘We have met with foes/ That strike beside us’ V, vii, 28).

There is an altogether appropriate image of his final isolation in his defiant ‘They have tied me to a stake; I cannot fly,/But bear-like I must fight the course’ (V, vii, 1).  In a 1962 Stratford production Eric Porter played Macbeth and, as J.R. Brown reports, ‘his death was that of a tired, angry, disarmed fighter: to make this clear he was killed on stage after he had been encircled by the entire army and had lost all his weapons’ (Shakespeare’s Plays in Performance, 1966, p. 185).  The transformation from leader to quarry is here complete.

The pattern of Macbeth’s isolation, therefore, involves him in more than a progressive physical and mental detachment from other human beings.  He is an exile from the world of daylight, familiar with witches and with apparitions unseen by anybody else, making discoveries about his predicament which he can never share with others who have never dared, as he has, to plunge into darkness. 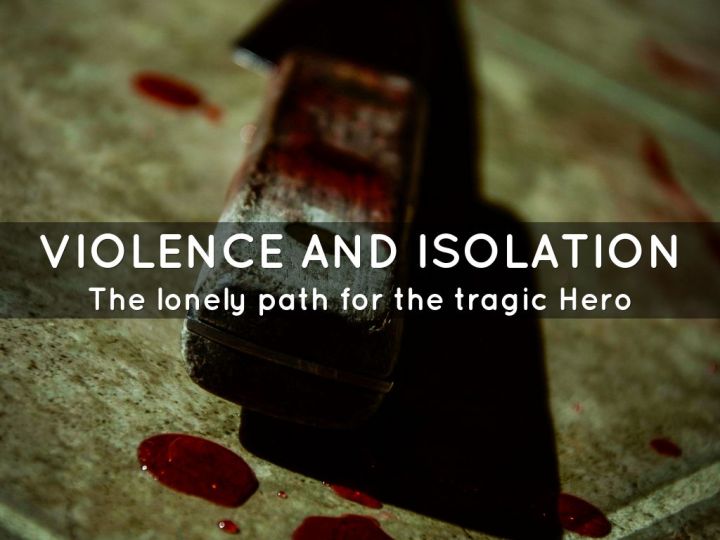