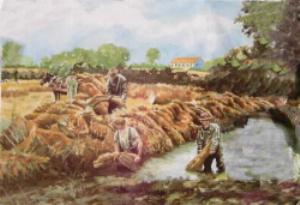 Death of a Naturalist

All year the flax-dam festered in the heart

Of the townland; green and heavy headed

Flax had rotted there, weighted down by huge sods.

Daily it sweltered in the punishing sun.

Wove a strong gauze of sound around the smell.

There were dragonflies, spotted butterflies,

But best of all was the warm thick slobber

In the shade of the banks. Here, every spring

I would fill jampotfuls of the jellied

Specks to range on window sills at home,

On shelves at school, and wait and watch until

The fattening dots burst, into nimble

Swimming tadpoles. Miss Walls would tell us how

The daddy frog was called a bullfrog

And how he croaked and how the mammy frog

Laid hundreds of little eggs and this was

Frogspawn. You could tell the weather by frogs too

For they were yellow in the sun and brown

Then one hot day when fields were rank

With cowdung in the grass the angry frogs

Invaded the flax-dam; I ducked through hedges

To a coarse croaking that I had not heard

Before. The air was thick with a bass chorus.

Right down the dam gross bellied frogs were cocked

On sods; their loose necks pulsed like sails. Some hopped:

The slap and plop were obscene threats. Some sat

I sickened, turned, and ran. The great slime kings

Were gathered there for vengeance and I knew

That if I dipped my hand the spawn would clutch it.

Commentary:
In the title poem of his first ever collection, Death of a Naturalist, Seamus Heaney gives a very sensuous and sumptuous description of the goings on at his local flax-hole.  This hole or ‘flax-dam’ contained the flax which had been harvested and was now being soaked in a man-made hole in the corner of the flax-field in August.  When the process was complete the flax was taken out and became the raw material for the thriving linen industry which had long flourished in Northern Ireland but was now showing some signs of decay in the nineteen fifties.  The poem has an added resonance for me because I live in a beautiful part of West Limerick and next door to me is the townland of Ahalin, or Achadh Lín in Irish, which means the ‘field of the flax’. Each time I read this poem I am reminded that at some time maybe in the 1800’s or before just over the road from me was our very own flax-field with its festering flax-dam!

In this poem, ‘Death of a Naturalist’, Seamus Heaney gives a brilliant description of the local flax-hole.  It is a memory poem, one of the many poems written about his childhood and early school days.  Heaney, in this first collection of early poems mines a rich vein of childhood memory.  It is, however, embellished memory – childhood through a rosy adult lens.  The poem is extremely sensual and evokes the senses of sight and sound and smell to perfection.  Indeed, the poem invites the reader to read it aloud such are the myriad examples of assonance and alliteration scattered throughout.

The flax-dam or flax hole came into its own each August when the flax crop was ready for harvest.  Flax pulling by hand was a backbreaking job, taken on by casual, often transient workers. Hand pulling was necessary because the whole stem, from root to tip, was required to give the longest fibre, for the finest quality linen cloth. The pulled flax was tied up in beats (sheaves) and put in rows or stooks on the flax field.  The stooks were collected and put into flax holes, or dams, and kept under water for ten to fourteen days. This was to `rat’ or `rot’ the inside wood part from the outside fibres.

The ‘flax-dam’ festered and ‘sweltered in the punishing sun’ in high Summer.  We can almost hear the bluebottles as they,

‘Wove a strong gauze of sound around the smell’.

Each August the flax was immersed in the flax hole and sods of earth were used to keep it submerged.

The flax hole may have only been used by the farmers during the harvest but of course, it lay there unused all year round. The young poet, as naturalist, is obviously drawn to the pool at other times of the year as well, especially when there were great clots of frogspawn evident each Spring.  He also visits in May to see the dragonflies and every July and August to spot the butterflies:

There were dragonflies, spotted butterflies,

But best of all was the warm thick slobber

In the shade of the banks.

The poet uses onomatopoeia to great effect to aid his description: ‘bubbles gargled’, ‘slobber of frogspawn’, ‘coarse croaking’, ‘the slap and plop’, and the brilliant ‘blunt heads farting’.  We are also reminded of his age with the use of the word ‘jampotfuls’ and by the childish simile ‘Poised like mud grenades’.

Like all other budding young naturalists, he is lucky to have a great teacher! ‘Miss Walls’ encourages him and provides him with the necessary information, always appropriate to his age of course!

Miss Walls would tell us how

The daddy frog was called a bullfrog

And how he croaked and how the mammy frog

Laid hundreds of little eggs and this was

Her ecology classes sent him out to the meadows to collect samples for the classroom and for the windowsill at home in his kitchen in Mossbawn.  Miss Walls also imparted other vital pieces of information which are seized upon by the young eager naturalist:

You could tell the weather by frogs too

For they were yellow in the sun and brown

There is a sense of childhood foreboding and fear of the flax hole and the mating frogs which is recreated with great accuracy by the poet – he knew, or he had been told by his elders, that ‘if I dipped my hand the spawn would clutch it’.  These stories were obviously very effective in keeping inquisitive young boys away from the vicinity of these dangerous flax dams and he feels threatened and frightened by the scene that confronts him at the flax-dam.

Were gathered there for vengeance and I knew

That if I dipped my hand the spawn would clutch it.

Indeed, the whole poem can be seen as a metaphor for growing up, laden with imagery which could be interpreted as sexual: we sense a child’s revulsion as he discovers the facts of life and his ensuing loss of innocence. He will never feel the same again about the countryside after this encounter with the bullfrogs!  As the poem’s title suggests,therefore, his days as a naturalist are drawing to an end!