Hopkins said that ‘The Windhover’ was ‘the best thing I ever wrote’.  We should first get the feel of the poem by reading it more than once silently and then aloud.  Then we begin to realise what a superb description we are given of a bird in flight.  His words and phrases seem to mime or mimic the energy and grace of the falcon’s flight.  This sight of a hovering falcon is again a relatively common sight today so hopefully, the next time we see such a sight we can recall the words of Hopkins. Hopkins once said that we should read his poetry with our ears, which seems like an impossibility but is not, since many of the sounds we hear create images in our mind.

In ‘The Windhover’, Hopkins uses recurring images of royalty.  The high-flying solitary falcon is a monarch of the sky, surging through the steady air.  The poet uses chivalric terms such as ‘dauphin’, and ‘minion’ to capture the elegant and dignified ‘striding’ falcon, the prince of the daylight.  God, too, is visualised as a ‘chevalier’.  Indeed, there are so many images given to us in these eight lines it is hard to know where to begin! The words ‘rolling level underneath him steady’ are best taken as a compound adjective, qualifying ‘air’.  Next, we find the falcon ringing ‘upon the rein of a wimpling wing’.  Here the bird, by means of a mixture of metaphors, seems to become a bell, hanging by its wings in mid-air.  ‘Wimpling’ means quick beating, fluttering or rippling.  Therefore, we have an image of the falcon, bell-like, swinging back and forth in a wide arc (‘on a bow-bend’), having mastered ‘rebuffed’ the big wind.

However, Hopkins’ imagination is turbo-charged here and the phrase ‘to ring upon the rein of a wimpling wing’ may also be a metaphor from horse-training, the term being applied in a riding school to a horse circling on the end of a long rein held by its trainer.  Also, we must remember that ‘to ring’ is also a technical term used in falconry and this then leads on to the image of a skater doing a figure of eight on the ice!  He compares the swooping movement of the falcon to an ice skater and this image also conveys the speed of the bird’s flight.  At any rate, the idea of the falcon as a hanging bell, filling the heavens with joyful news (‘In his ecstasy’) is confirmed in that other beautiful sonnet ‘When Kingfishers Catch Fire’ where he says:

Bow swung finds tongue to fling out broad its name

The main feature of Hopkins’s images, then, is the way in which they are loaded with unlimited possibilities.  It is as if Hopkins intended to create multiple ideas in some of his images, each interesting and valid in its own way.  For example, the image of the falcon on a ‘rein’ may represent the motion of a horse at the end of a trainer’s long rein.  However, the term, being ambiguous, could also suggest the spiral climb of the bird.  Perhaps, Hopkins is encouraging us to ‘Buckle’ several ideas in our engagement with the poem.  What is not in doubt, at any rate, is the powerful and original representation, through the falcon, of Christ’s beauty and nobility.  In essence, the poet is like an Impressionist painter striving to capture the essence (the inscape) of the bird.

The word ‘Buckle’ is pivotal in the poem.  This word has been the subject of discussion and debate for many years.  Some believe that the word means ‘Challenge!’ or ‘Tackle!’ or ‘Come to grips with!’ adversity; others believe that it means ‘Collapse’ or ‘Crumple’ before the assault of evil.  There is even a third interpretation which proposes that it means to clasp, fasten together into a single unity all the skills and aspirations.  My own interpretation of the word is that the majestic beauty of the bird as described in the octet of the poem crumbles into insignificance when compared to the beauty and majesty of Christ as we see him in the sestet.

Other original images include that of ‘blue-bleak embers’ representing self-sacrifice and the ‘plough down sillion’ that evokes the hardship and perhaps tedium of daily labour.  In ‘The Windhover’, therefore, Hopkins employs images of flight, of majesty, of sacrifice and of glory ranging from a ‘dauphin’ to a ‘skate’s heel’, from a ‘fire’ to ‘blue-bleak embers’.  Such remarkable and wide-ranging imagery reflects the vivid and precise response of the poet’s imagination to the sight of the falcon at dawn.  More importantly, perhaps, the imagery reveals that the moment created a response of deep spiritual insight.  There is nothing particularly novel in taking a falcon as subject matter.  However, what is original is the way Hopkins engages with the falcon, observes it and concentrates on it in a deeper way and articulates what it revealed to him through an interesting range of original imagery.  The priest-poet is praying!

The last three lines give us two images which stand for triumph arising out of defeat and this echoes the essence of the Christian mystery – Crucifixion gives way to Resurrection.  He uses words like ‘fall’ (Jesus fell three times on his way to Calvery), ‘gall’ (referring to the stale wine or vinegar offered to Jesus on the cross), and ‘gash’ (an open wound), to reinforce this connection in our minds.  The soil that has been ploughed and trodden on gives off a splendid ‘shine’ or radiance; the embers of the fire when they part and fall produce a victorious ‘gold-vermillion’ brightness.

‘The Windhover’ provides us, therefore, with an excellent example of the unique concepts associated with Hopkins: inscape and instress and sprung rhythm.  The effort to describe the bird goes beyond mere description of its physical form or appearance (‘wimpling wing’): there is almost a scientific attempt to ‘capture’ its movements (‘Of the rolling level underneath him steady air’).  This, however, is only part of the process.  The inner form of the bird, its virtues or strengths, are identified (‘Brute beauty and valour and act, oh, air, pride, plume’).  There is more.  The hidden ‘meaning’ or symbolic significance of the falcon is uncovered in a moment of mystical recognition that Joyce would call an ‘epiphany’.  T. S. Eliot called it ‘the intersection of the timeless with time.’  It is the moment when the observer recognises God’s plan for mankind in the action of a bird in flight.

Now look back again over the poem and note the use of detail that goes to make the poem’s eloquence: note that the poem is a sonnet, with octet and sestet; note his extensive use of alliteration and assonance, his use of exclamation; note the tension between line and sentence, form and sense, by the use of colour and the use of heraldic imagery, the passionate rise and fall of the meditation, by the expert daring of it all.

I can’t get it out of my mind that Hopkins lived and died in the nineteenth century and yet he is one of the greatest poets of the twentieth century.  Hopkins valiantly tries to describe perfection in this beautiful poem yet he once said, ‘Perfection is dangerous because it deceives us – because there is no perfection on this earth’.   As another later twentieth century poet, Leonard Cohen,  says, echoing Hopkins’ image of the falcon as a bell:

Ring the bells that still can ring,

There is a crack in everything,

That’s how the light gets in. 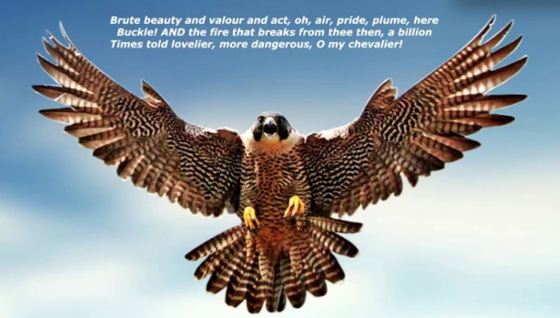