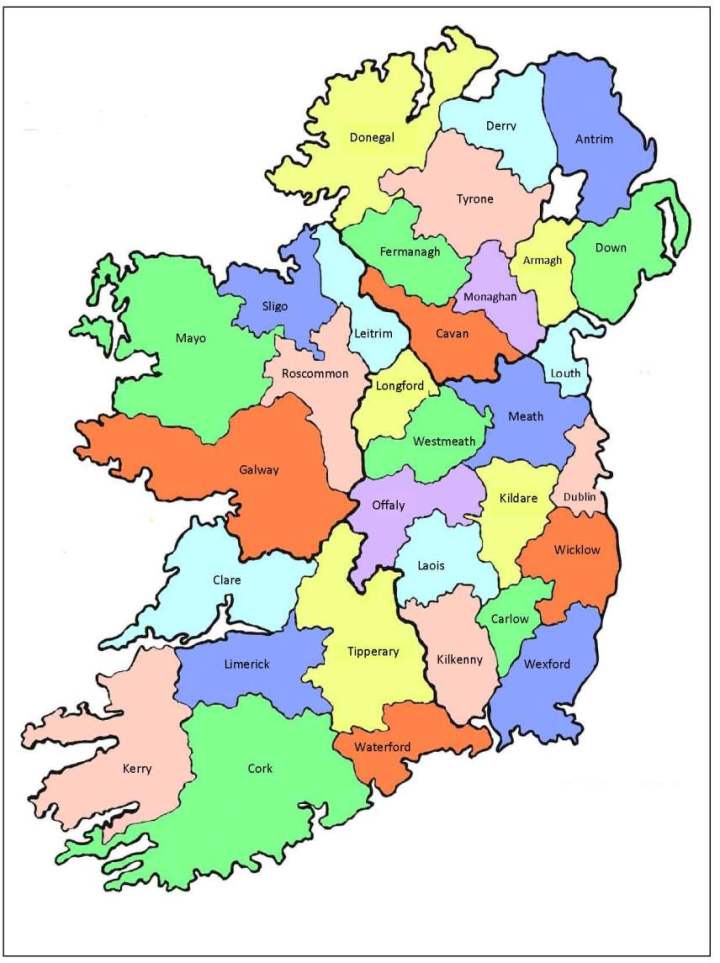 The division of Ireland into counties took place shortly after the Anglo-Norman Invasion, led by King Henry II in 1171.  In 1211 King John (1199-1216) divided the whole of the country that acknowledged his government into twelve counties in Leinster and Munster. Very little regard seems to have been paid at this time to the ancient division of Ireland into five Provinces.

In Munster, King John created the five counties of Waterford, Cork, Kerry, Limerick and Tipperary which at that time formed the province.  The provinces of Connaught and Ulster were divided into counties by Statute by Elizabeth I (1558-1603).  Connaught had seven counties: Galway, Clare, Roscommon, Mayo, Sligo, Longford and Leitrim.  Since then Clare has joined Munster and Longford has moved to Leinster.  The province of Ulster was divided into nine counties: namely those of Down, Antrim, Tyrone, Armagh, Monaghan, Cavan, Fermanagh, Donegal and Londonderry (cf. Harris’s Hibernica, p2).

The first sub-division of Counties is into Baronies, largely corresponding with that of Hundreds (or Cantreds) in England.  The name, Barony, derives from the sub-division of the conquered land among the Norman barons, hence barony.  Other baronies appear to have been formed successively as a result of submissions made by individual Irish chiefs who ruled over them; the territory of each constituting a Barony.  This may account for the inequality in size between them and the manner in which parts of many are intermixed among each other in some cases.  There were formerly ten baronies in County Limerick: namely Clanwilliam, Lower Conello, Upper Conello, Coonagh, Coshma, Coshlea, Kenry, Oweneybeg, Pubblebrien and Small County.  This was later extended to fourteen, including Limerick City Borough, Kilmallock, Shanid and Glenquin.

My own parish of Knockaderry (formerly the parish of Clonelty) was situated in the barony of Glenquin.

The next sub-division into Parishes is of much greater antiquity than that of Baronies.  Originally it was purely Ecclesiastical and was introduced among the Civil sub-divisions largely out of convenience.  Since all of these sub-divisions were central to the taking up of the Census this particular sub-division has always caused some difficulty as often the Civil and Ecclesiastical arrangements did not always correspond.  In the past, parishes were sometimes found to extend not only into other baronies but even into different counties.  Added to this you sometimes had the anomaly of parishes belonging to the Established Church differing from those of the Roman Catholic Church.  It has to be stated that the establishment of the Parish Rule by the fledgeling Gaelic Athletic Association in the nineteenth century led to a great consolidation of parish boundaries leading to very little room for debate or confusion!

The smallest subdivision of the country is that of Townlands.  This name, however, is not universal throughout Ireland: some counties have used the term Ploughlands (Plowlands) instead; each Ploughland being supposed to contain 120 acres approximately.  Townlands have, in many instances, been sub-divided, and in many cases, the name has been changed.  Many names, now antiquated, were formerly used to designate the smaller sub-divisions of land in Ireland.  The following are the most often used:

The Ploughland (Plowland) and the Gneeve are the only names that were noticed by the Census Enumerators in the Censii taken up in 1821 and 1831 that were still in use in some parts of Ireland.  At that time the most common land measurement was either the Irish or Plantation Acre, the Cunningham Acre or the English Acre.  The difference between these arose from the different lengths of the perch used as a standard in each: the Irish perch was 21 feet, the Cunningham perch was 18.5 feet and the English was 16.5 feet.

It is interesting to note the instructions given to the Enumerators before they set out to gather their information for the Census of 1821.  They were instructed to ‘execute their duty in the mildest and most inoffensive manner; complying in so far as could be with the feelings of the people and never having recourse to the law except in the most urgent necessity.’  There are notes on what constitutes a family and among other points raised were – ‘strolling beggars were considered as forming distinct families and where met with on the road at a distance from their usual place of residence were entered as residing in the house in which they last lodged.’  It also noted that ‘every collection of contiguous houses, if under twenty, was to be considered as a Hamlet; if more than twenty and not under a peculiar local jurisdiction a Village.’

In the final report of the 1821 Census, we find the following comment – God be with those innocent times! – that in organising the data of the Census ‘in the classification of the Sexes no difficulty occurred’ (Report signed by W. Shaw Mason, Record Tower, Dublin.  11th July 1823).