Stephen chooses exile from his native land mainly because of his growing disenchantment with Irish society on many levels.  Indeed, his final decision to fly the nets which are impeding his development as an artist is achieved following a series of struggles with authority from which he ultimately decides to flee.  His sense of injustice is first stirred when he is a young schoolboy.  When Wells asks him if he kisses his mother at bedtime, he discovers that whether he should say Yes or No he will be laughed at.  Wells has already shouldered him into the ditch, and this first experience of school bullying makes him ill.  Christmas at home, which is expected to be all warmth and friendship and happiness after the chilly misery at school, turns out to be a time of angry political quarrels among adults who are all supposed to be devoted to Ireland.  When Stephen returns to school after suffering the misfortune of having his glasses broken he suffers the injustice of being punished for it.  Priests are supposed to be good, he thinks, but they get angry and behave cruelly.  To make things worse, he later discovers that his bold protest against injustice becomes a subject for laughter among those responsible for the injustice.

Stephen’s confidence in the moral authority of the powers-that-be in Clongowes is thus undermined and this is also accompanied by the undermining in his respect for his father.  The visit to Cork reveals Mr Dedalus as a boastful, flattery-loving, gas-bag and feckless drunkard, drinking and boasting while all the time his financial affairs are deteriorating and the home is getting more squalid.  Stephen’s boyish attempt, when he gets his prize money, to stem the tide of sordid poverty that seems to be sweeping over his family proves absurdly inadequate.  His attempt, after confession, to remodel himself on the pattern of perfection taught by the church, leads to extravagant feats of self-discipline that deny his most powerful aspirations towards life and beauty.  When the suggestion is made that he should consider a vocation to the priesthood, an instinctive inner conviction assures him that his future cannot be in subjection to an ordered system like that of the Church.  The vision of the wading girl stirs the religious outburst, ‘Heavenly God!’ and we recognise in the way the landscape calls up in him poetic phrases that satisfy his thirst for harmony between the outer world and his inner emotional life, that he is to be a future artist and not a future priest.

It is from a sordid scene at home and past the mad cries from a nunnery that Stephen makes his symbolic progress across Dublin to the university, where study opens up a world of exciting philosophical thought.  But even here there is no prospect of ultimate life-long satisfaction.  He quickly comes to realise that the university teachers are also limited and unimaginative, and the students’ enthusiasm is stirred by causes with which Stephen cannot sympathise.  The idealistic support for the Czar’s peace initiative strikes him as sentimental.  He feels unable to commit himself to corporate demands or protests.  The enthusiasm of students such as Davin for the cause of national independence, the revival of native culture, the enmity against England seems to require a commitment that mortgages life in advance of living it.  Stephen senses his own Irish inheritance, not as a great blessing, but as a series of fetters imposed by history willy-nilly on his generation.  Moreover, he knows from the past that Irish nationalist movements tend to lead, not to victorious achievements by the leaders, but to their betrayal and martyrdom.

Stephen himself demands of life, above all, freedom in which he can work creatively as an artist.  Closely associated with the demand for freedom is his sensitive responsiveness to beauty in the spoken and written word.  He has found in his home an increasing sordidness and crudity that are the antithesis of beauty.  He has found in the Church a cruelty hostile to justice and freedom, for the caning with the pandybat at Clongowes is of a piece with the horrendous torments pictured in Father Arnell’s sermons as the future eternal lot of millions of fellow human beings.  He has found in the political life of Ireland a collection of inherited attitudes and passions that embitter family relationships, which turn young students into obsessed fanatics, and that claim people’s thoughts and energies before they have had time to develop their own individualities.

The upshot is that Stephen turns the rebellious slogan of Lucifer, in turning against God, ‘I will not serve’, into his own motto in rejecting the demands of home, fatherland, and Church, and dedicating himself to the task of expressing himself freely as an artist.

The decision takes shape in his mind in association with thoughts of the career of his mythical ‘ancestor, Daedalus, who found escape in flight from imprisonment in a labyrinth.  Stephen has often trod the maze of Dublin streets seeking escape of one kind or another, whether in the confessional or the brothel.  Only when he crosses the bridge to Bull Island and stares out to sea does he glimpse the vision of true fulfilment.  He cannot find this fulfilment without flight.  His mother prays, he says, that, ‘I may learn in my own life and away from home and friends what the heart is and what it feels.’  So he sets out, ‘to encounter for the millionth time the reality of experience and to forge in the smithy of my soul the uncreated conscience of my race.’  His final prayer is not directed to God but to his role model, Daedalus.  He prays: ‘Old father, old artificer, stand me now and ever in good stead.’ 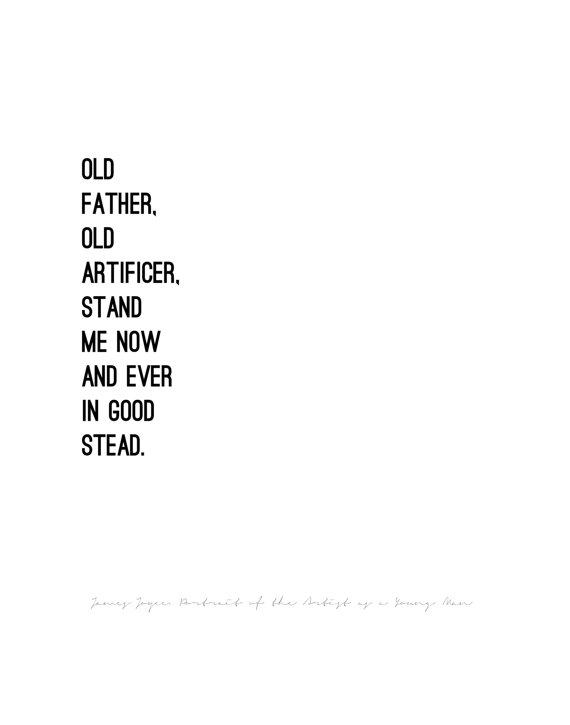 One thought on “Why Does Stephen Dedalus Choose Exile from his Native Land?”