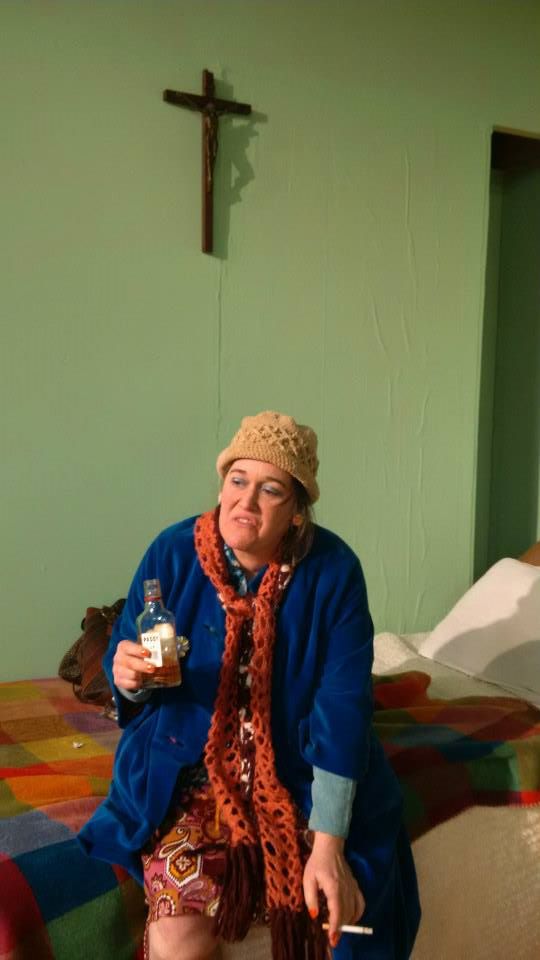 Following their  hugely successful production of Jim Nolan’s ‘Moonshine’ last year, the Knockaderry Clouncagh Drama Group, directed by Johnny Corkery, are back once again, this time with yet another poignant Irish play, Brian Friel’s ‘The Loves of Cass McGuire’.  The audience  were  highly entertained but were also at times brought close to tears at the opening performance in The Resource Centre, Knockaderry  of this powerful and deeply moving production of Brian Friel’s play. The play tells the sad delusional story of Cass, (played magnificently by Sue Mullins pictured above),  who is a tired and tipsy woman, who has spent  fifty two years working in a ‘speakeasy’ – a bar of sorts, a block from Skid Row, among downbeats, bums and washed up people in New York city.

Cass McGuire returns to Ireland after all those years in America and her remaining family – a brother (and his family) and her mother – welcome her back but then place her in a nursing home, Eden House, when she gets too difficult to handle. The play focusses on and explores the psychology of Cass as she returns from her emigration and exile and her search for ‘home’.   Gripping, often humorous, but steeped in compassion, Friel scripts a rich and complex portrait of a marginalised emigrant returning home.   We are only too aware of the different perceptions our relatives in America, ‘the Yanks’, have of ‘the ould sod’; the land of leprechauns, Arran sweaters and thatched cottages. We can, therefore, easily empathise with Cass’s dilemma.  She has returned to a world she cannot recognise and the play explores the difficulties she has in coming to terms with a life not as she imagined and the exclusions society now imposes upon her.  Whereas  Friel’s, Philadelphia Here I Come dealt with Gar’s physical act of emigration, this play deals with the psychology of returning and this  marks it out as a very relevant work – indeed, it can be said of Cass, like many a returning exile, she comes back to a home that does not exist except in her fantasy.

The ‘loves’ referred to in the title of the play meanwhile are not love affairs, but rather the love Cass has for people in her life.  Among them Cass’s mother played by Mary Angela Downes, her brother Harry (Colman Duffy), his wife  Alice (Rachel Lenihan) and four children to whom down the years she has sent money and presents and cards,  doing what ‘the Yank’, was expected to do.  She believes her sacrifice for her family will be appreciated, and she dreams of a happy homecoming, but sadly finds she has been deluding herself.   The reality was much different, however, and she wasn’t much thought about in her absence and when she came home, she was seen as a bawdy, loud, embarrassment and put into a home,  the ironically named Eden House.  Eventually this loveless scenario is replaced by a fantasy world of make-believe where a new vision of happiness is constructed from her past.  Cass and the other residents, particularly Trilbe Costelloe (Mary Geaney) and Mr. Ingram (Paddy Mulcahy),  begin rhapsodising about a past that never happened – they lay their dreams before us and ask us to thread softly..  The play, therefore, combines pathos, humour and truth – it is tragic but there is also scope for humour and, typical of Friel, and this production at times, the humour and comedy is of the type that brings the audience to the verge of tears.

This production gives full voice and exposure to the myriad of theatrical devices and innovations used by Friel to push the boundaries of theatre.  In this play Friel plays with conventions of theatre and memory. Cass, (Sue Mullins at her mischievous best),  breaks through the ‘fourth wall’ constantly, emerging on to the stage from the body of the audience.  Furthermore, she  refers directly to the author and title of the play, and she works hard to deny memories of how she got into her current situation, repelling the eerie draw of the other patrons of Eden House, superbly captured in the performances of Mary Geaney and Pat Mulcahy in particular.   My only genuine regret on the night was that Friel was not present to see the production for himself!

Sue Mullins was amazing as Cass and her shouts of bawdy joy and puzzled moments of stillness as she peered out into the audience and a deserted banquet hall, were all part of a memorable tour de force.   Colman Duffy was splendid as the weak but well-meaning Harry and he was well supported by Rachel Lenihan, recently returned from her successful trip to The Globe Theatre in London.  Paddy Mulcahy as Mr. Ingram  and especially Mary Geaney as Trilbe were essential and excellent in establishing and maintaining the poetic mood of this play and in easing Cass’s adjustment to Eden House ‘truth’.  John Young brought much needed laughter (if ironic and knowing) to the story as Pat Quinn.  Owen McMahon as Dom and Alison Lenihan, (in her first live role for the Drama Group),  brought the innocence and dreams of youth to the production.

This production by the Knockaderry Clouncagh Drama Group  gives full rein to a cast lead by strong, forceful female characters, especially the lonely, isolated figure of Cass McGuire played with aplomb by Sue Mullins.   This role and the role of Madge in Philadelphia Here I Come, foreshadows  Friel’s later success with the Mundy sisters in Dancing at Lughnasa – actually if Knockaderry Drama Goup are considering a production for next year’s drama circuit they could do worse than turn to Dancing at Lughnasa – casting would not be a problem anyway!

This is a very powerful play, both humorous and sad, but ultimately uplifting. The play deals with identity, the notion of truth and communication, and how memories both public and private enable us to ride the highs and lows of life. Throughout the play, images from the past flood into Cass’s head and the story unfolds when, she returns to an Ireland and family which have changed utterly from what she had imagined all those years ago. To save herself from these changes, she eventually shares her life, work and experiences with us and those around her – continuously bursting through Friel’s  ‘Fourth Wall’ to engage the audience.  We also meet her brother and family who have remained at home, and we hear their stories. On her entry to Eden House, a “rest home” for older people, Cass encounters Trilbe Costellooe, Mr. Ingram and the new arrival Mrs. Butcher (played by Betty O’Sullivan), who help her see her way to survival.   Those sad stories and memories of other days came home with me after this production.  This is a  powerful and engaging production, not to be missed. Directed deftly by Johnny Corkery,  it combines excellent stage craft, a classic Friel set and a vibrant cast which  brings Friel’s characters to life. 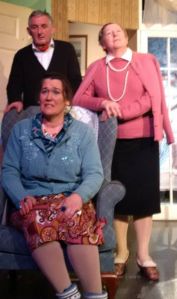