Tintern Abbey is a reflective ode written in blank verse.  It is set in Tintern Abbey on the banks of the Wye, which Wordsworth had revisited with his sister, Dorothy, after an interval of five years.  As I have said already it is concerned with the revelations of the Divine in Nature (or perhaps the Divinity in Nature).  It is a double revelation; that which he experienced five years previously, and that which he experiences in the present.  He compares the sort of man he was on both occasions.  (Can you detect here a connection with Yeats’ poem, The Wild Swans at Coole?). 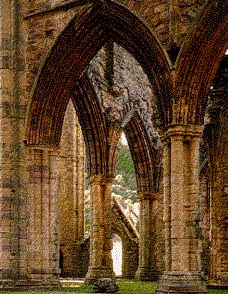 He describes here the place that was the source of his inspiration simply and with touches that suggest mystery.  This is a formal philosophic statement of the presence of the Divine in Nature.  This verse-paragraph is a painting in words, but at the same time we are kept at a distance, the recollections are only ‘half-remembered’.  The word-picture is very effective in its colour and implied colour, and in the sounds that reflect the images he creates for us, the waters ‘rolling from their mountain springs / With a soft inland murmur’, and the silence of the place emphasised by the sibilants in ‘wild secluded scene impress / Thoughts of more deep seclusion’.  There is a breath-catching pause as he tries to recollect the hedgerows, ‘hardly hedgerows, little lines / Of sportive wood run wild’.  The final five lines of the paragraph again emphasise the silence with a magnificent use of sibilants.  The repetition of ‘once again’ lends a distancing effect underlining the passage of time.

These lines are a perfect example to us of what Wordsworth meant by the phrase, ‘Emotion recollected in tranquillity’ – which he uses in the Preface to the Lyrical Ballads.  He first states his doctrine: the memory of this scene has been not only soothing and healing, but has aroused feelings of pleasure, which have resulted in impulses of kindness and love.  He lists the gifts he has received from this scene in order of their occurrence: ‘tranquil restoration’ – refreshment not only of intellect but also of the soul; the moral benefit; and lastly, ‘the serene and blessed mood’ – the emotions begin the process and then all is left behind and the soul is naked.  Here we get glimpses of this new religion – his Pantheism, in which his love of Nature leads to his love for man – ‘feelings too … of kindness and of love’.  He refers here, too, to poetic inspiration which comes and helps us solve the mysteries of life: ‘While with an eye …. We see into the life of things’.  He sees through the eye, not with it; he has moved into a spiritual world.  He does not explain or defend his doctrines; but merely states it as an experience.

Despite his efforts to speak in the language of ordinary men, his diction here is complicated and he cleverly creates a tension between the heavy, weary and unintelligible world and this serene and blessed mood; between the body and the soul, between the din of the cities and the quiet of harmony.  Although this passage is reflective he uses images for his emotions and the things that give rise to them: ‘as is a landscape to a blind man’s eye (indicating his awareness), ‘In which the affections gently lead us on’ (the notion of a blind person being guided by a good and kindly friend).  There is frequent use of parallelisms (repetition of an idea using different words) so characteristic of his work, ‘slight or trivial’, ‘the burthen’ and ‘the heavy and the weary weight’.

These lines are written in the classical style and are in praise of the Wye.  He praises it as the soother of the tribulations of life.  Again there is the contrast between the fever of the world and the tranquil wanderings of the Wye.  Darkness and joyless daylight are equated.  The alliteration in ‘fretful stir / Unprofitable, and the fever of the world’ links the ‘fretful’ and ‘fever’ in the notion of a heartsick patient.

This section is the central part of the poem in which he goes on to show the stages through which his response to nature has passed: first, ‘the glad animal movements’ with their unthinking animal pleasure; secondly, in youth, the visual delight he took in nature – ‘the sounding cataract’; finally, in maturity, the intense union with nature.  In the first two he accepted nature as a sensation, almost as an appetite.  His recollection is uncertain – ‘half-extinguished thought’, ‘recognition dim and faint’, ‘sad perplexity’.  All these have given way to a new reflective attitude to Nature; an intense and spiritual union with her.

But while he abruptly sweeps away the past with, ‘That time is past’, there is a sense of loss, a nostalgia for the ‘aching joys and dizzy raptures’, the ecstasy of his youthful days.  The past has not really been compensated for by the ‘abundant recompense’.  The words ‘faint’ and ‘murmur’ and ‘mourns’ are stressed; they are emotional and are opposed by the stilted reason of ‘I would believe …’.  The ‘still sad music of humanity’ also suggests a sense of personal loss.  But the loss is not tragic; it is the universal sense of loss when youth passes.  The compensations are in his intellectual response to Nature; the awareness of a religious feeling provoked by, ‘a presence that disturbs me with the joy / Of elevated thoughts’.  He still has an affinity with Nature; it merely differs in texture.

Wordsworth was concerned with the unity of the mental and physical worlds (unlike Yeats who tried to sail away from the ugliness of the physical world to the world of Byzantium).  Here he emphasises this unity by listing real and abstract things side by side: ‘the light of setting suns’, ‘the round ocean’, ‘the living air’, ‘the blue sky’, ‘the mind of man’.  Note too the synonyms, ‘a presence’, ‘s scene’, ‘something’, ‘a motion’, ‘a spirit’, and the repetition of ‘all’ – again emphasising this unity.  In this verse paragraph he attempts to bring all his experiences together, perhaps to create for himself a deity to whom he can offer these experiences.  There is no doubting the religious nature of these lines ‘a sense sublime’, ‘a presence’ – a realisation of something of deeper significance.  In the final lines he praises his God in a litany of images, which stress his close relationship with nature.  Nature, for him,  is the ‘anchor of  my purest thoughts’, ‘nurse’, ‘guide’, ‘guardian of my heart’, ‘soul of all my moral being’.

These lines are addressed to his sister Dorothy much in the same way as St. Paul sent epistles to the early Christian communities in Rome or Antioch or Corinth!  They advise and admonish her to place her trust in Nature.  This section is another good example of Wordsworth’s ‘emotion recollected in tranquillity’.  He urges her to rely on Nature in her trials and tribulations.  It is an impassioned appeal and he is very sincere, and his language underlines this.  It is a tribute to Nature as a teacher and as a friend.  Here he returns to his own first relationship with Nature, which he sees in Dorothy’s eyes, and he underlines the religious aspect of his present attitude to Nature by making a prayer to Nature to protect her, and to guide her to his own present state.  But there is a sadness in his wish that she will remember him when she too will return to Tintern Abbey.  He returns again to the contrast between the ‘evil tongues, rash judgements, nor the sneers of selfish men’ and ‘Nature never did betray the heart that loved her’.  The sense of loss is here also, as he almost hungrily points to his ‘former pleasures’ reflected in her ‘wild eyes’.  But he also balances against it the ‘sober pleasures’ that will parallel his own ‘sense sublime’; her mind will also be a ‘mansion’ for her memories.  Nature will be a ‘nurse’ to her also with its ‘healing thoughts’.

One feels that Wordsworth has perhaps introduced his sister to this landscape and meditation merely to prolong his own deep feeling and attitudes to Nature.

The movement of the poem is conversational (he uses the rhythms of everyday speech), sometimes to the extent that there is a tendency to run into prose (see last five lines).

Note: You might also like to read a broader look at Wordsworth’s poetry in ‘Wordsworth’s Poetry’ in the Archives of this blog.