Hard Times is unusual in several respects. It is by far the shortest of Dickens’ novels, barely a quarter of the length of those written immediately before and after it.[1] Also, unlike all but one of his other novels, Hard Times has neither a preface nor illustrations. Moreover, it is his only novel not to have scenes set in London.[2] Instead, the story is set in the fictitious Victorian industrial Coketown, a generic Northern English mill town, in some ways similar to Manchester, though smaller. Coketown may be partially based on 19th-century Preston.

While the novel is neither gripping nor memorable it is interesting to examine it from a 21st-century standpoint.  And as we try to fathom the political manoeuvrings of  Mr Trump (a very Dickensian character!) and Lady May (another one!) we begin to realise that the more things change the more they stay the same!  The family theme is a perennial one as is education.  Everyone has problems with them and there are always controversial views about them which lead to much debate. The Environment and the workplace are central to modern life.  We are all too aware that some of our world leaders today are in denial about such issues as global warming and climate change – and you know what they say: ‘De Nile is not just a river in Egypt’!  Industrialisation and its effects were seen as major problems in Dickens’ time, as they still are today.  Trade Unions are still an important force in our modern workplaces. Teenagers are big business today and a central core of modern society.   In Louisa and Sissy Jupe we can recognise the first faint traces of the modern teenager, with minds of their own, rebellious attitudes and a power of expression.  Marriage breakdown is certainly one of the major social problems in our modern world.  Louisa’s tragic and arranged marriage foundered on the rock of incompatibility, which is the most frequently cited reason for the breakdown of marriage in the modern divorce court.

The Gradgrind family, around whom the story evolves, are no more curious than any comparable family in the present era.  While the imagination and the spiritual side is stifled they are well-fed, as well-educated as the narrow curriculum and method permitted and live in a comfortable house.  The father, Mr Gradgrind, is an authoritarian figure to his teenage son and daughter.  Yet halfway through the story, he is there when his daughter needs him.  He is willing to support and harbour her in her hour of need.  He also learns from his mistakes and is ready to admit them.  I think he is a very good father.  He is basically a very good human being.  Professionally he is stifled by the constraints of a utilitarian system of education.  Is he any different from today’s teacher who cajoles, pushes, and encourages students towards those elusive points for College entrance?   Is he any different from today’s ambitious parents who make great sacrifices to give their offspring a good start in life?  He is, in a sense, a ‘single’ parent due to his wife’s inability to function as a normal mother.  She is a pitiful hypochondriac who seems to derive no pleasure whatsoever from life.  Mr Gradgrind is a gentleman and a patient one.  He seems to have the patience of Job.  He gets on with his job and provides for his family.  He rarely raises his voice to his offspring and certainly never his hand, which we must admit is a curious and admirable situation, certainly in a Victorian household.  One of the most contemporary aspects of Mr Gradgrind is his very generous fostering of Sissy.  He has a sense of responsibility towards young people.  He is prepared to take Sissy into his home and provide her with education and sustenance and a family life.

In the opening chapters of Hard Times, the education system is hammered home.  Facts alone count.  The imagination cannot be given free rein.  It must be stifled.  The education system is not child-centred, but facts-centred.  Before we proclaim our horror let us scrutinise the modern day pressures of imparting knowledge.  Are students today still considered to be ‘vessels’ into which teachers pour the main points of novels, poems, and drama?  Now and again teachers dream of being inspirational but then the grim shadow of the curriculum hovers (and visions of A’s, B’s and C’s) and their dreams of emancipating the shackled student fade into oblivion.  If we sat for awhile and compared and contrasted the square classroom where facts predominated with its modern counterpart we might end up concluding that very little indeed had changed.

One of the most interesting characters in the novel is Louisa, a teenager in the beginning of the novel who bears a remarkable resemblance to her modern counterpart.  Louisa emerges as a real live girl of the 19th. Century.  She is a bright girl who has an imaginative and spiritual side despite attempts to suppress it both at home and at school.  The friendship that develops between her and Sissy is solid.  They have little in common financially, socially or intellectually, but both have kind hearts.

There is a nice balance of giving and receiving in the friendship.  It is mutually advantageous.  In the earlier section of the novel, Louisa listens to, encourages and comforts Sissy when she confides in her over her learning difficulties at school.  The two teenagers closeted together in the study is a nice touch.  As talent and ability continue to vary in every age surely similar scenes are replicated today in many a home and classroom.  Later in the novel, Sissy Jupe will amply repay her loyal friend.  As young women now, Sissy will become a tower of strength to Louisa in her emotional turmoil.  The teenage friendship has matured.  It will last a lifetime.  Many a modern woman must find solace in the comfort and chat of a woman friend, when life strikes at them, when they are experiencing difficulties with the opposite sex, be it husband, fiancé, partner or friend.  The urge to confide is intrinsic to the human psyche.  It is an enduring trait.

Recent times have seen marriage under attack on all sides.  Louisa’s leaving her husband is a prelude to the modern dilemma of marriage breakdown.  There are thousands of solutions put forward.  Marriage guidance counselling is available and yet we are no nearer to resolving the situation than Louisa was on that terrible night of her life, when confused and desperate, she returns to her father’s house.

Work is a major part of life throughout the ages.  There have always been problems associated with work and labour.  The gruelling conditions of the workers in the factories are in sharp contrast to working conditions today.  Yet there are some echoes from the Dickensian age in our world today.  Air pollution is still a problem in many industrial areas today.   All around, even in some rural areas, there are chilling reminders that the problems of environmental pollution are far from solved.  When we see the murky waters of our major cities and the inevitable accompanying stench we can wonder if we are any different from the grim industrial smoke-filled Coketown.  The workers had practically no rights in the Victorian age.  The small beginnings of a Trade Union, whose principles were orchestrated by Slackbridge, have gathered such momentum over the intervening years that the clout and power of the Trade Union movement is a dominant feature of modern society.  Yet we only have to look at some recent disputes such as between Ryanair and its ‘baggage-handlers’ to realise that there are still employers who would refuse their workers what modern society considers a basic right – the right to be represented by a Trade Union.

To conclude, maybe we begin to realise, having read the Hard Times, that the more things change the more they stay the same!  Our world still revolves around the home, the school and the workplace.  Environmental influences are as important and far-reaching then as now and the stifling of the imagination and the emotions can often set in train a chain of tragic circumstances from which there is no escape. 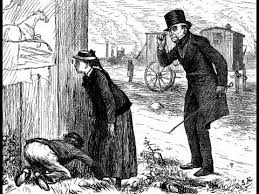