This year’s winner of the Griffin International Poetry Prize is Irish poet Michael Longley for his collection The Stairwell (Jonathan Cape).  In his acceptance speech on Thursday night in Toronto (June 4th, 2015), Longley said he had been writing since he was 15 years old.  “It’s my life.  It’s my religion.  It’s the way I make sense of the world,” he said.  The jury described Longley’s The Stairwell as ‘a book by a major poet writing at the height of his powers’. Longley has also won the Whitbread Poetry Award, the T.S. Eliot Prize and the Queen’s Gold Medal for Poetry.  What follows here is a selective and subjective analysis and review of the major themes and issues which frequently recur in Longley’s poetry. 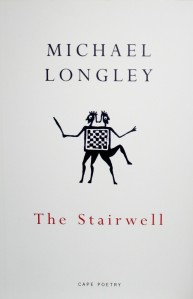