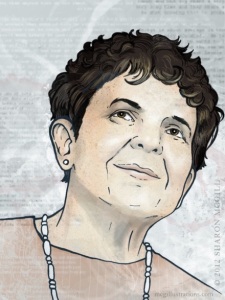 The poems of Adrienne Rich spoke to me in a powerful way. She was definitely one of the most original and thought provoking poets that I have studied. Rich speaks for both herself and her generation in the throes of great change. The poems that I have studied represent many of the new ideas that emerged during her life. Not only do I find these ideas interesting but I believe that I have benefited directly from them.

‘Aunt Jennifer’s Tigers’ speaks to me on many levels. It is an overtly feminist poem exploring the position of married women in society.  However, it is also a great piece of writing. Rich creates contrast for maximum effect; the tigers are “proud and unafraid” unlike Aunt Jennifer who is “terrified”.  The nervousness of the aunt is perfectly conveyed through sound and movement; her “fingers” are “fluttering through her wool”. Her creativity and personality is being suppressed by the marriage she is in: “The massive weight of Uncle’s wedding band/Sits heavily upon Aunt Jennifer’s hand.”

There is a sense that her marriage is ‘weighing’ her down. The dominance of her husband is suggested through the capitalisation of “Uncle”. It is clear that this marriage is an unhappy one; even when her aunt is dead she is, “still ringed with ordeals she was mastered by”. Unfortunately, even though this poem was written over fifty years ago, I can still recognise women like Aunt Jennifer.

However, the poem is not completely pessimistic. I think it does a lot to celebrate the potential of women. Aunt Jennifer may have been repressed and timid but she produced tigers that were “proud and unafraid”.  These tigers live on beyond her death. I think this poem hints at the changing position of women that we see today.

The threat of change is evoked beautifully in ‘The Uncle Speaks in the Drawing Room’. Unsurprisingly, this poem is taken from Rich’s collection called ‘Change of World’. The arrogance of the speaker is displayed in his dismissal of the protesters as a “mob”. Like ‘Aunt Jennifer’s Tigers’, the dominant figure is the “uncle”.  I believe he is a symbol of a patriarchal society that is class-ridden with a sense of privilege and entitlement. References to the “drawing room” and “crystal vase and chandelier” reinforce this idea of an ostentatious, wealthy world removed from the common people.

I felt the anger of the mob as they “talked in bitter tones” and “fingered stones”.  Alliteration is used to great effect as Rich describes the “sullen stare” of the crowd. The strong rhyme and rhythm in the poem is reminiscent of a drumbeat or death march. It increases the tension in an already dramatic poem. The uncle dismisses the threat as “follies that subside”. However, he still fears for his “glass”. The fact that he says, “none as yet dare lift an arm” implies that he believes that they may in time. The speaker ends the poem with a warning about how his generation must guard the treasures of “our kind”. I thought this poem was a clever insight into the minds of those who hold the power in the world. It created vivid pictures for me and I was disappointed when it came to an end.

A poem that deals with change and power in a slightly less dramatic way is ‘Living in Sin’. This poem really spoke to me because I could easily relate to it. As a big fan of the movies, I am consistently bombarded by idealised depictions of love that would probably be impossible to recreate in real life. Rich’s poem gave me an insight into the difference between our romantic expectations and the reality of everyday life.

The poem tells the story of a woman who decides to live with her boyfriend. From the first lines of the poem, we realise that things are far from perfect:  “She had thought the studio would keep itself;/No dust upon the furniture of love.”  It is clear that the woman had not even considered the mundane realities of domestic life. She feels guilty about her resentment of domestic chores because in that society it was “half heresy” not to embrace what was seen as ‘women’s work’. I enjoyed the wry humour in the poem as the woman is disturbed by the reality of her new life when “a pair of beetle-eyes would fix her own”. The pressure on women to conform is conveyed by the fact that her “minor demons” jeer her as she cleans the apartment.

It is interesting that the man whom the woman is tending to seems very far from a romantic hero. In fact, he hardly seems worthy of her. He fails to see the problems in the house. He is lethargic and lacks personality. She “writhes” under “the milkman’s tramp”, a metaphor for life and even though “by evening she is back in love again”, it is not as “wholly” as before. I believe this poem acts as a warning to women everywhere to beware of slipping into a life of domesticity where their needs become subservient to those of others.

Another poem that deals with relationships is ‘From a Survivor’. This poem is a lot more directly personal than ‘Living in Sin’. Rich uses the first person in this poem and it is obvious that this is about her failed marriage to Alfred Conrad. After seventeen years of marriage, the couple separated. Months after their separation, Conrad committed suicide. This poem spoke to me because it is very sad and I think it was courageous of Rich to publish it.

The poem expresses itself simply and the language used is almost conversational. Rich reflects on the “pact of men and women in those days”. The use of the word “pact” suggests some sort of battle, perhaps, referring to the shifting balance of power between the sexes at the time. Rich shared the view of all newly weds that herself and her husband were “special” and could withstand the “failures of the race”.

The poem addresses the fact that her husband is now “wastefully dead”. There is real pathos in the lines: ‘Your body is as vivid to me/As it ever was: even more since my feeling for it is clearer’.

Now that their relationship is over and he is dead, Rich can assess what they had together. When they initially married, the status between man and wife was unequal. The husband was a “god” with the “power” over his wife. This poem really interests me on many levels.  It is a very personal reflection on Rich’s life but it also documents a life that has been left behind. I believe, as a result of pioneering women like Rich, our generation will not suffer such inequalities in our marital relationships.

In many of her earlier poems Rich gives the impression that she is at the mercy of elements that she can’t quite control.  In ‘Storm Warnings’, for example, Rich, by using a sustained extended metaphor, portrays the weather as a powerful force for change that threatens her fragile home.  All she can do is close the windows and lock the doors against the storm that is brewing outside.  As the poem points our, even with our fancy new-fangled technologies and our weather reports, we are unable to control the weather.  We might be able to predict what is going to happen, but we are powerless to prevent it happening.  Time and darkness are two other forces that we are unable to control.  She also seems to suggest that there are elements of our own lives that we are powerless to change also.  As Rich points out: ‘Weather abroad / And weather in the heart alike come on / Regardless of prediction’.  By this she seems to be talking about the depression and other moods that we suffer from throughout our lives.

Rich wrote ‘Power’ in 1974. From the beginning of that decade, she had devoted her life increasingly to feminism. Certainly, the conflict of an influential woman existing in a patriarchal society is explored in the poem. The poem first interested me because Marie Curie was famous and known to me for her dedication to science and the priceless discoveries she had made during her life. She was a fascinating woman who was the first person ever to win two Nobel prizes for her discovery of the radioactive elements plutonium and radium.  Her work with these elements led to her eventual death from leukaemia.

The poem follows a ‘stream of consciousness’ method that I found both challenging and interesting. It opens with the discovery of,  “a hundred-year-old cure for fever  or melancholy  a tonic”. This bogus “cure” contrasts with the real cures Curie found in her research.

I was really moved by the description of Curie’s suffering. Rich conveys a vivid picture of the scientist’s “body” being “bombarded” by radiation, her eyes developing “cataracts” and her skin “cracked and suppurating”.  The final image of Curie being “unable” to “hold a test-tube or pencil” is particularly poignant.

There is a sense that she was forced to deny “her wounds” because they came “from the same source as her power”.  It is highly ironic that the work that Curie did made her both famous and sick. One wonders if Rich is making a broader political point here. Is she saying that in a male dominated world, a woman must make serious sacrifices to be successful? The poem brought to mind the problems that many women who have both children and demanding jobs experience today. There is always a sacrifice that has to be made in some way. Whatever the ultimate message, this poem is a powerful testament to both Marie Curie and Rich’s powers both as scientist and poet.

Rich said that she had written,  “directly and overtly as a woman, out of a woman’s body and experience”. Her work was both challenging and thought provoking. I was continually excited and surprised by her unusual perspectives and striking imagery.