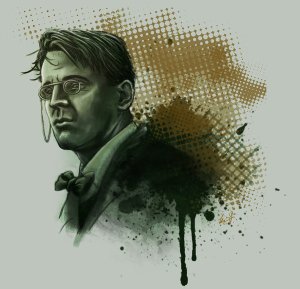 Yeats’s poetry examines a powerful series of opposing tensions between youth and age, order and chaos.   Indeed, it is easy to find evidence for the opinion that he is ‘a poet of opposites’.  His poetry explores many diverse conflicts at both a personal and national level.  One of the strongest impressions created by his poetry is that of searching.  Sometimes he searches for a means of escape, sometimes for a solution, but the presence of numerous rhetorical questions throughout his poetry reveals a man who was sensitive to the world around him, encountering it with intellectual vigour while remaining true to his heart.

One of the major conflicts in his work is that of youth and age.  Yeats can become melancholic in his awareness of life’s brevity as we see in ‘The Wild Swans at Coole’ where he reflects rather dolefully that ‘The nineteenth autumn has come upon me’.  Time refuses to stand still for a poet who realises that ‘All’s changed since ….  Trod with a lighter tread’ along the autumnal shores of the lake at Coole Park.  A similar acceptance of time’s inexorable progress occurs in ‘Easter 1916’ where horses, birds, clouds and streams ‘Minute by minute they change.’  In the opening stanza of ‘Sailing to Byzantium’ Yeats presents a dramatic affirmation of youth where the young are ‘in one another’s arms’ mesmerised by the ‘sensual music’ of love.  This poem establishes powerful conflicting claims between the younger generations who live in the sensual world and the more sedate singing of the old scarecrow, reincarnated into an eternal art form of the golden bird.  The bird has transcended the decay and infirmities of the transitory world; it may claim to be superior to the ‘Fish, flesh, or fowl’ who have been ‘begotten, born’ but must also die.  However, the rather cold, mechanical song of the golden, immortal bird does not quite match the passionate, vibrant music of the young.  And yet, they too are the ‘dying generations’.  In ‘Sailing to Byzantium’ the old poet, a figure of fun in his own country, leaves the sensual world for the changeless world of Byzantium that is beyond time and passion.  His appeal is to be reincarnated.

A second significant conflict in Yeats’s work is that between order and chaos.  Yeats admired the aristocratic tradition in eighteenth-century Ireland.  The world of the Great House was aligned to his own sense of identity with that particular class.  He felt at home in Lady Gregory’s house at Coole Park and in his poem ‘The Wild Swans at Coole’ he remembers in the opening stanza the tranquil, serene and orderly world of that eighteenth-century estate.  The graceful living of Lisadell is beautifully evoked in the opening images of ‘In memory of Eva Gore-Booth and Con Markievicz’ as he describes,

The light of evening, Lisadell,

Great windows open to the south,

Two girls in silk kimonos, both

Beautiful, one a gazelle’.

Using an image from nature, Yeats makes the transition from the refined, elegant youth of the girls to their turbulent adult lives when he says,

Blossoms from the summer’s wreath’.

The remainder of the poem seems to lament the passing of such an ideal world of youth in the women’s futile attempt to find, ‘Some vague Utopia’ that aged their beauty until it was ‘skeleton-gaunt’.  The references to conflagration at the end of the poem point to the destruction of the traditional values that were cradled in places such as Lisadell.

In place of such values Yeats presents the birth of ‘mere anarchy’ in the poem ‘The Second Coming’.  This poem is a stark and terrifying vision of disintegrating social order and ominous evil that has been born and ‘loosed upon the world’.  Images of the ‘blood-dimmed tide’ and a ‘rough beast’ slouching towards Bethlehem show how troubled the poet is by the increasing violence and the annihilation of cultural and aristocratic values.  The conflict between order and chaos is the focus of more local manifestations of violence and murder in ‘A Stare’s Nest by my Window’.  In the poem, which details the negative impact of the Civil War, the poet fights his own inner battle against chaos in calling for renewal, rebirth and regeneration in ‘the empty house of the stare’.  However, the hope of a return to some order is filled with ‘uncertainty’; the predominant images in the poem are of destruction where,  ‘A man is killed, or a house burned’.  The house could well have been a Lisadell or a Coole Park.

Yeats did attempt to resolve some conflicts in his poems but in many cases he had to accept that such a synthesis was not always possible let alone probable.  But he did remain in contact with the world, however imperfect it seemed, and encountered it with his complex temperament that could whisper of grace, youth and beauty or clamour against injustice, old-age and decay.  Perhaps we should be grateful that many conflicts were never resolved, for it was they that evoked his most difficult struggles and his most poignant poetry in granting him ‘an old man’s frenzy’. 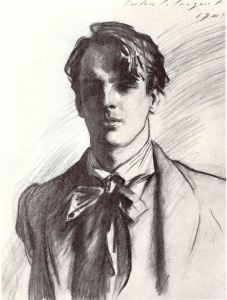