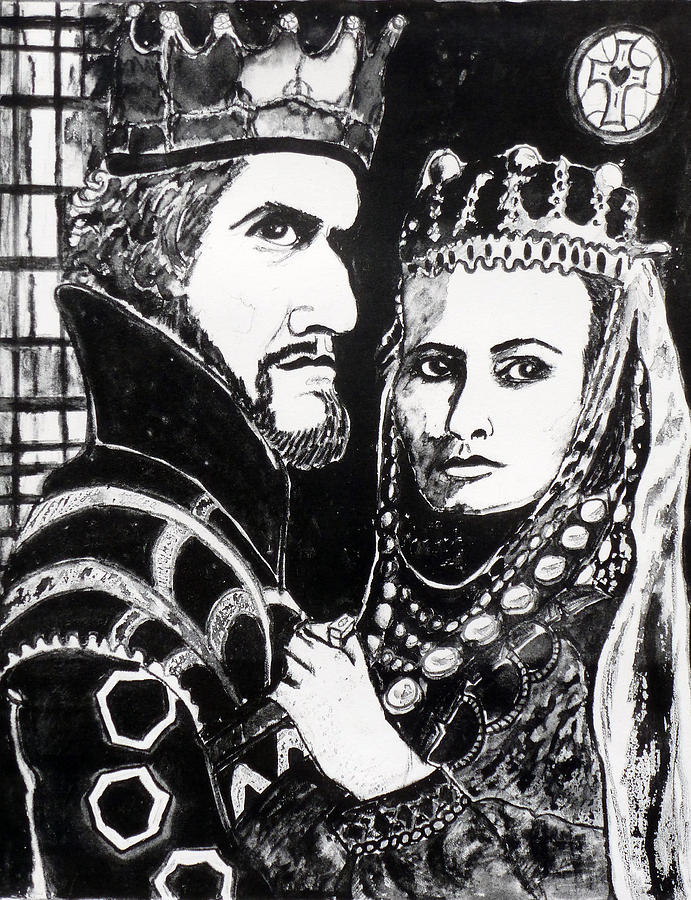 A summary of what happens in Macbeth could make the play look like an exciting crime story, but it is what happens within the hero, the development of his understanding of himself and his plight, and his sharing of this with the audience, that lifts it to a higher plane.

When the unexpected results of his actions emerge, the tragic hero questions what has happened to him, and through this questioning learns the vital truth about himself.  This brings him around to facing his destiny and completing it by his death. It is through this recognition that he reaches his tragic vision.  His error was committed in blindness; recognition involves the intrusion of the light, the acknowledgement of the blindness.  Recognition is not simply his knowledge of what has happened to him (in Macbeth’s case that he has been duped by the witches; he recognises his folly in having trusted them), but the new awareness of the unalterably fixed pattern of the miserable life he has created for himself through his deeds, accompanied by a deep sense of loss at the thought of what he has sacrificed and forsaken.  These elements are present in Macbeth’s infinitely poignant soliloquy in Act V:

I have liv’d long enough: my way of life

Is fall’n into the sere, the yellow leaf;

And that which should accompany old age,

I must not look to have; but in their stead,

Which the poor heart would fain deny, and dare not.

Macbeth arrives at the recognition of having irrecoverably lost, through his own blind deed, the things on which his happiness on earth depended.  He discovers that he cannot arrest the process he has set in motion, and gains an insight into the workings of evil. He realises that evil isolates: his deeds have cut him off from all he treasures.  He is alone in a hell of despair, and is aware of the futility of all he has planned.  It is the fate of the tragic hero to be finally isolated from the ways of ordinary men, but it is in his isolation that he grows in stature and self-awareness, and consequently in the estimation of the audience, that he faces up to his destiny and confronts it.  For Macbeth, this means dying valiantly in battle (V, iii, 32; V, v, 52) rather than taking his own life (V, vii, 30) or running away (V, vii, 1), or being taken prisoner (V, vii, 56).  Those who like to moralise the tragic ending will find in his fate a striking illustration of the saying that ‘all they that live by the sword shall perish by the sword’ (Matthew, Ch. 26: verse 22); it is a fate ironically anticipated by him very early in the play: ‘This even-handed justice/ Commends the ingredients of our poisoned chalice/ To our own lips’ (I, vii, 10).

There are various degrees of recognition in tragedy.  In some (like Othello), recognition is minimal: Othello knows what he has done and what he has lost, but learns little or nothing about himself.  In Macbeth, at the end, the hero’s recognition is considerable, but still far from complete.  He remains puzzled and baffled to the last, failing to grasp the how and why of his fate.

In his case it is interesting to notice that partial recognition comes early in the play, that disillusion sets in long before his fortunes fail: in fact it sets in when he is at the height of his worldly success.  Even before he has murdered Banquo, he can face the unthinkable prospect of having damned his soul (‘mine eternal jewel/ Given to the common enemy of man’ III, i. 67). Earlier still, his sense of what he has done to himself as well as to Duncan is expressed in the richly suggestive, ‘To know my deed twere best not to know myself’ (II, ii, 72).  But if he does sense early on what is happening to him as a result of what he has done, he does not really know what kind of future is in store for him until the point at which he realises that it is as easy for him to go forward in crime as to go back.  The recognition that he cannot control the processes he has set in motion, or alter the course he has set for himself is a tragic one: ‘I am in blood/ Stepp’d in so far that, should I wade no more/ Returning were as tedious as go o’er’ (III, iv, 136).

But the exact moment when Macbeth realises he is doomed is when Macduff relates that he was ‘from his mother’s womb untimely ta’en (V, vii, 44).  He has expressed an earlier, partial, recognition of his fate at the news that Birnam Wood is moving towards Dunsinane (‘I pull in resolution, and begin/ To doubt the equivocation of the fiend’ (V, v, 42).

It is the quality of his response to his destiny and the manner in which he confronts it that determines his essential worth as a tragic hero and that gives him his ultimate tragic status.  The physical death of the tragic hero is a final symbol of his recognition: of the death of his former blind and ignorant self.  Our tragic hero has paid a chilling and costly price for self-awareness.