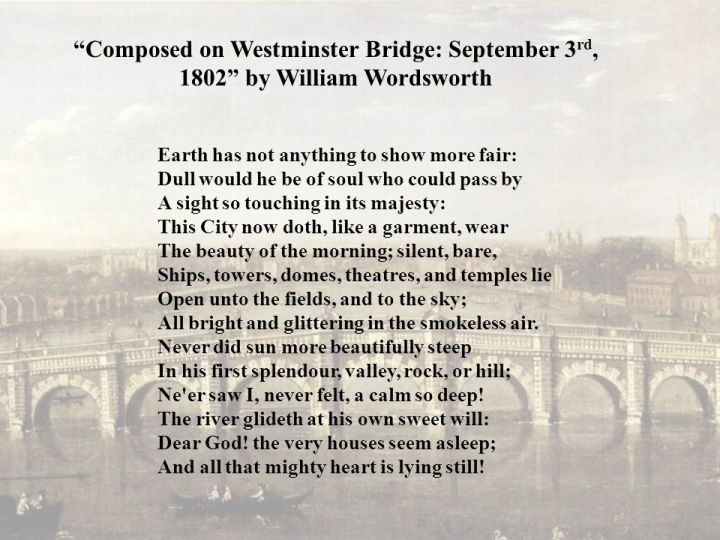 The Romantics, and especially Wordsworth, were unlucky not to have lived in the smartphone era!  Then again maybe we’re lucky that no such modern technology existed in 1802!  If Wordsworth were alive today his camera phone would surely be filled to capacity and the scenes and events he captured would be relived and enjoyed later in the comfort of his study – ’emotion recollected in tranquility’ brought into the twenty-first century!

This poem is noteworthy in particular because of its location.  Instead of the leafy banks of the Wye or the rolling hills and dales of Cumbria, he brings us to the heart of the city in the early morning.  He wants to stress to us that his philosophy of ‘emotion recollected in tranquillity’ will work just as well in the grubby city as it would by the shores of Lake Windemere.

In this case, he is inspired by the view he saw from Westminster Bridge on the morning of 31st July 1802, although he didn’t write the poem until September of the same year.  In fact, the more correct title of the sonnet is ‘Composed on Westminster Bridge, September 3rd, 1802’.  He and his sister, Dorothy, were crossing the bridge on a coach taking them to a boat for a trip across the English Channel to France.  We know all this because Dorothy mentions the event in her diary:

‘We mounted the Dover Coach at Charing Cross.  It was a beautiful morning.  The City, St. Paul’s, with the river and a Multitude of little boats made a most beautiful sight …. The houses were not overhung with their cloud of smoke and they were spread out endlessly, yet the sun shone so brightly with such pure light that there was even something like a purity of Nature’s own grand spectacles.’

I’m sure we have all experienced a city in the early morning before the sleeping giant awakes.  The early morning light gives the impression that the city has been recently washed and is now clean in the morning air.  The gaudiness of the night before with its neon lights flashing on the water and the constant rumbling and screeching of traffic has yet to begin anew.  This fleeting moment of peace before the storm is what Wordsworth is describing here as he crosses London Bridge on an early morning stagecoach.

The theme of the poem is London as it lies asleep in the early morning sun. We get the impression here of a sleeping giant, perhaps rather terrifying when awake as some cities tend to be, but, now it sleeps so peacefully that those who see him are no longer afraid and are able to admire his elegance and splendour.

The tone of the poem is one of awe and breathless admiration at the sight before him.  He feels a deep sense of peace and contentment at the sight of such man-made things as ships and towers.  These sights are made even more wonderful in his eyes because of the closeness of Nature herself – the fields, the sky, the sun, and the river Thames itself.

His opening line shows that to him this is the ultimate in beauty; he cannot understand how anyone could ignore such a sight.  We must remember that the poem, like most of Wordsworth’s poetry, is one of feelings and emotions.  He refers to this scene of grandeur (‘majesty’) as ‘touching’ whereas often we consider grand and majestic things to be somewhat cold and distant.  The city, to him, is a living thing; it is clothed in the ‘beauty of the morning’.  The city is also silent at this time of the morning and this impression is reinforced by his use of the sibilant ‘s’ sounds in ‘silent’, ‘ships’, ‘sky’, ‘smokeless’ and also in the line:

There is a lovely juxtaposition when he uses the word ‘bare’ to describe the ships and towers without their human activity in sharp contrast to the city wearing its beautiful morning ‘garment’.  Wordsworth is suggesting to us that all these man-made things are ‘bright and glittering’ only because they are exposed to Nature; that the air is clean only because man is not yet awake to stain it with his smoking fires.  The idea of the sharp, clear and clean air is suggested by the words ‘sky’, ‘bright’ and ‘glittering’.

His long list of man-made objects conveys to us what makes the city different: not just one ship but many; not just one tower but tower blocks.  The use of alliteration in ‘towers’, ‘theatres’, ‘temples’ also conveys a sense of wonder in the reader and adds to their importance.

There is a sense that the sun is dressing the city to meet another day and that it has never steeped the countryside in the same manner as it does the sleeping city.  Gradually the city comes alive: the river is moving gracefully (‘glideth’), unimpeded by the small boats who ply their trade up and down the Thames all day long.  The houses have yet to come alive and they will do so as soon as their eyes (windows) are touched by the sun’s rays.

The poet’s prayerful exclamation of ‘Dear God!’ is ambiguous and it seems as if the thought has entered his head that everyone in the houses is also dead.  This is a striking example of the poet’s imagination.  The final line reintroduces us to the idea of the heart of the city, our sleeping giant.  The ‘mighty heart’ suggests something huge, whose heart is gently and soundlessly beating.  We all have seen what happens next on our TV screens as the camera uses time-lapse shots to show the ever-increasing flow of people and traffic and shops opening their doors, as the city slowly, relentlessly comes to life – the great giant stirs.

The poem presents us with a very compact series of images.  His use of the classic Petrarchan Sonnet formula shows his discipline and craft.  (The rhyming scheme is abbaabba cdcdcd).  His use of run-on lines suggests the movement of the rising sun over the city.  They also emphasise the poet’s use of ordinary speech rhythms, which was a strong feature of Romantic poetry.  The run-on lines may also mirror the poet’s rush of emotions as he encounters and strives to capture the scene before him.

A poem with such feeling must be musical.  Note his use of broad ‘o’ sounds in the first quatrain, ‘show’, ‘more’, ‘so’, ‘doth’.  These broad vowel sounds combined with the long ‘i’ sounds in ‘by’, ‘sight’, ‘like’ also convey the poet’s sense of awe and wonder.  I have already mentioned the sibilant ‘s’ sounds that occur throughout the poem and these are associated with the silence and calm of the early morning scene.  Finally, in the final three lines, this harmony is brought out by the assonance in ‘sweet’, ‘Dear’, ‘seem’, and ‘asleep’ and in ‘glideth’, ‘mighty’, and ‘lying’.

This poem is similar to ‘Daffodils’ and other masterpieces like ‘Tintern Abbey’ in that it furthers Wordsworth philosophy of what poetry is.  He is yet again storing up photographic images using his ‘inward eye’ so that they can be recalled and enjoyed again in the peace and quiet of his own study at a later time.  Nature is here presented from a different perspective.  It is a delight to the senses and a source of aesthetic beauty and its pleasures can be evoked through memory to fortify the poet at times of distress and amid the ‘din’ of towns and cities.  It is a comforter to those in despair, and it can enrich our physical well-being and restore our mental health, prompting him to exclaim as he does here on Westminster Bridge that he never before ‘saw, never felt, a calm so deep!’