My father worked with a horse plough,
His shoulders globed like a full sail strung
Between the shafts and the furrow.
The horses strained at his clicking tongue.

An expert. He would set the wing
And fit the bright-pointed sock.
The sod rolled over without breaking.
At the headrig, with a single pluck.

Of reins, the sweating team turned round
And back into the land. His eye
Narrowed and angled at the ground,
Mapping the furrow exactly.

I stumbled in his hobnailed wake,
Fell sometimes on the polished sod;
Sometimes he rode me on his back
Dipping and rising to his plod.

I wanted to grow up and plough,
To close one eye, stiffen my arm.
All I ever did was follow
In his broad shadow around the farm.

I was a nuisance, tripping, falling,
Yapping always. But today
It is my father who keeps stumbling
Behind me, and will not go away.

Commentary:  This poem appears in Heaney’s first collection, Death of a Naturalist, published in 1966. In this collection, Heaney is keen to introduce himself and tell us where he comes from. The collection includes poems such as ‘Digging’, ‘Churning Day’, ‘Early Purges’, ‘The Diviner’ and ‘Follower’.  All of these poems reflect his farming background and they depict a world view and country crafts and skills that are now redundant and no longer to be readily seen in the Irish countryside.  We are introduced to men who dig in gardens, men who cut turf, who sell their cattle at the local fair, and who rid the farmyard of unwanted kittens.  Heaney tells us that he intends to follow in their footsteps – to dig ‘down and down for the good turf’, to plough his lonely furrow as a poet.

The theme of this poem is the relationship between father and son.  In poetry, fathers are constant ghostly shadows offering nostalgic, intimate images of a safe and tender childhood.  Heaney explores this theme here in ‘Follower’ and in many other poems like ‘Digging’ and ‘The Harvest Bow’.  In ‘The Harvest Bow’, Seamus Heaney’s father, Patrick, emerges as a strong ‘tongue tied’ man, a man of action and of few words.  He has fashioned the harvest bow for his son as a ‘throwaway love-knot of straw’.  The poem is a tender exploration of the Father/Son relationship and it is clear that an unspoken understanding has grown between them, lovingly expressed by the harvest bow which Heaney fingers and reads ‘like braille ….. gleaning the unsaid off the palpable’.  Heaney then translates what he has read and puts it into words which he fashions and plaits and weaves into a tender ‘love-knot’ of a poem.  In ‘Digging’ he explores other aspects of this same theme.  He looks down from his window and paints a rather unflattering picture of his father, ‘his straining rump among the flowerbeds’ reminds him of a scene twenty years earlier as his father was digging out potatoes on the home farm.  Here, in ‘Follower’ he juxtaposes his father’s patience with him as a child with his own grown up impatience and annoyance,

It is my father who keeps stumbling

Behind me, and will not go away.

The poem is titled ‘Follower’ and Heaney invites us to explore the various meanings of the word as it is used today – he follows in his father’s footsteps, we follow Man United, she is a follower of Christ, a disciple.  The poem ends with a denouement when the roles are suddenly reversed and now the father is seen ‘stumbling behind me’.  The great irony here, of course, is that Heaney was not a follower – he was a trailblazer, a man outstanding in his own field, so to speak!  Mark Patrick Hederman OSB,  former Abbot of Glenstal Abbey, County Limerick, uses a lovely analogy to describe poets and other artists in his book, The Haunted Inkwell– he says that artists are like the dove that Noah released from the Ark after 40 days to check if the waters were receding. Eventually, the third dove brought back an olive branch – we need trailblazers and scouts like that to go before us, to take the risks, and help us explore our unchartered waters.  Heaney is a poet, like Kavanagh and Hartnett, who has remained attached to his home place and the values and the traditions of his parents, ‘All I know is a door into the dark’.  We can be grateful that our poets are pioneers, working at the frontier of language.  They are translators, translating for us events that we cannot grasp.

These early poems in Death of a Naturalist are all metaphors, endeavouring to crystallise the meaning of art and the role of the artist in our world – the poet is described as gardener, turf-cutter, as diviner, as smithy, as ploughman.  He celebrates this local craftsmanship – the diviner, the digger, the blacksmith and the breadmaker and he hankers back to his childhood and the community of that childhood for several reasons.  Indeed, part of the excitement of reading his poetry is the way in which he leads you from the parish of Anahorish in County Derry outwards in space and time, making connections with kindred spirits, both living and dead, so that he verifies for us Patrick Kavanagh’s belief that the local is universal.  For example in  ‘The Forge’, he appears at first glance to be looking back with fond nostalgia at the work of the local village blacksmith, Barney Devlin.  However, the real subject of the poem is the mystery of the creative process – writing poetry is like ‘a door into the dark’.  The work of the forge serves, therefore, as an extended metaphor for the creative work and craftsmanship of poetry.

In ‘Follower’, like ‘Digging’, he continues to use this extended metaphor as he focuses on his father as farmer and ploughman.  His father is ‘an expert’.  He recalls precious scenes and memories from his childhood with great accuracy.  He mentions the plough and all its individual parts, ‘the shafts’, ‘the wing’, ‘the bright steel-pointed sock’, the horse’s ‘headrig’.  The opening lines cleverly introduce the simile of his father’s shoulders ‘globed like a full sail’ and he then follows this with the exquisite metaphor of his father as ancient mariner using angles and eyesight ‘mapping the furrow exactly’ while the young Heaney struggles and stumbles ‘in his hob-nailed wake’.  His childhood is spent in his father’s shadow and he decides that ‘I wanted to grow up and plough’.  Similar to ‘Digging’, the very first poem in Death of a Naturalist, he wants to follow in his father and grandfather’s footsteps and dig except he realises that ‘I’ve no spade to follow men like them’.  Instead, he decides that he will follow in their footsteps but instead of a spade he will dig with his pen:

Between my finger and my thumb

I’ll dig with it.

‘Follower’ ends with a jolt.  The poet is suddenly back in the present, the childhood reverie over.  He juxtaposes the past with the present: his youthful self,

.. was a nuisance, tripping, falling,

This memory is sharply contrasted with the awkward reality that time has passed and now it is his ageing father who is the ‘nuisance’,

It is my father who keeps stumbling

Behind me and will not go away.

During the last three verses, the poet returns to the present time and he says that nowadays his father is the one who is stumbling behind him because of his age. The word ‘Behind’ used by Seamus Heaney in the last verse, forces us to accept the total reversal of roles which have taken place.  The poet is no longer the follower and now his once stoical and patient father struggles to keep up as his impatient twenty-seven-year-old son sets sail on his own adventure.  He has finally moved out of his father’s shadow and now must plough his own unique and lonely furrow.

The poem is one of many which pays homage to the poet’s humble beginnings in Bellaghy, Mossbawn, and Anahorish.  It is interesting to note that many of the later poems in this collection, Death of a Naturalist, describe his developing relationship with Marie Devlin, his future wife (the collection is dedicated to her).  Surefooted, he begins his odyssey away from Mossbawn and on to Belfast, Glanmore, Oxford and Harvard, and into our hearts forever. 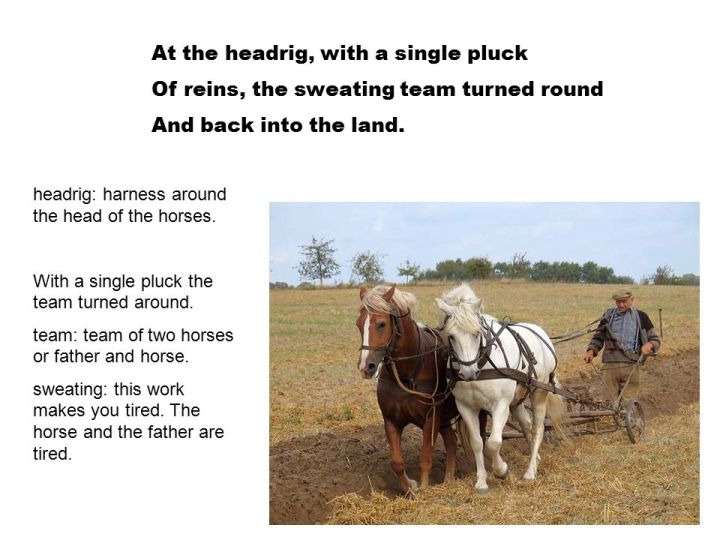 One thought on “An Analysis of ‘Follower’ by Seamus Heaney”